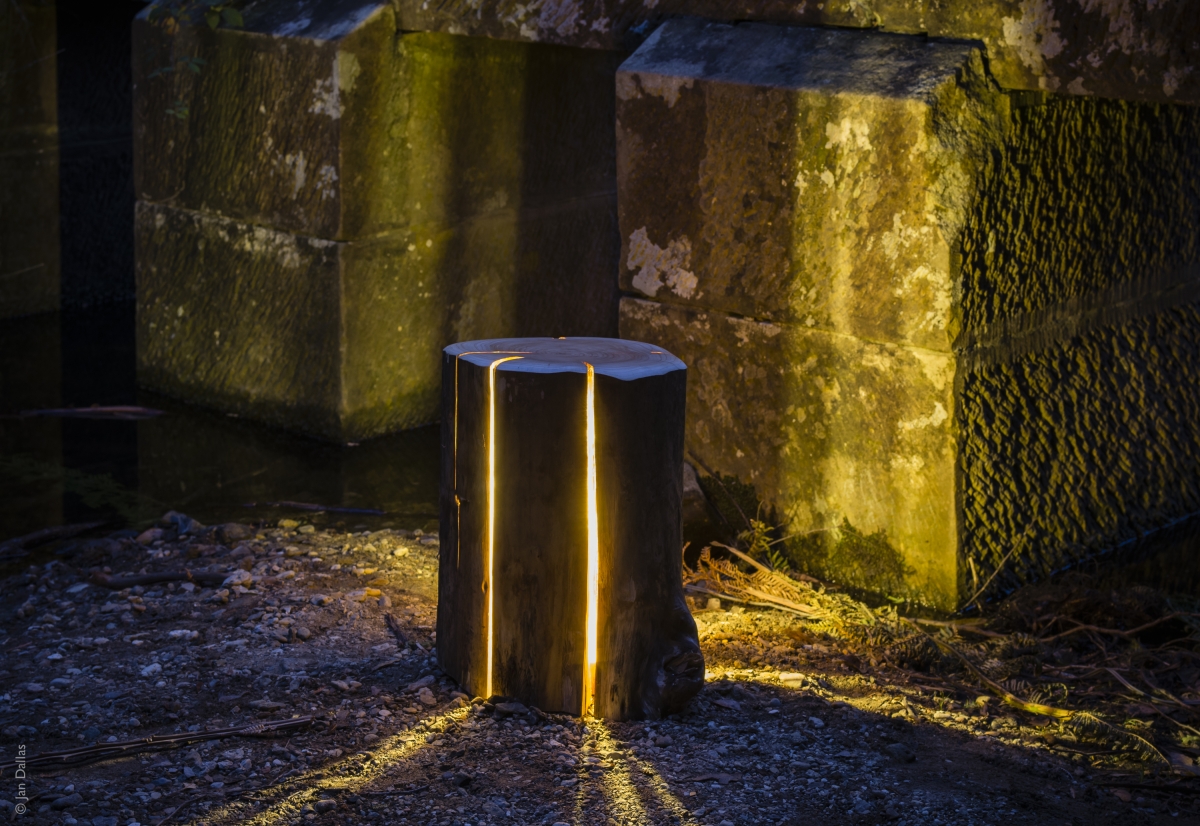 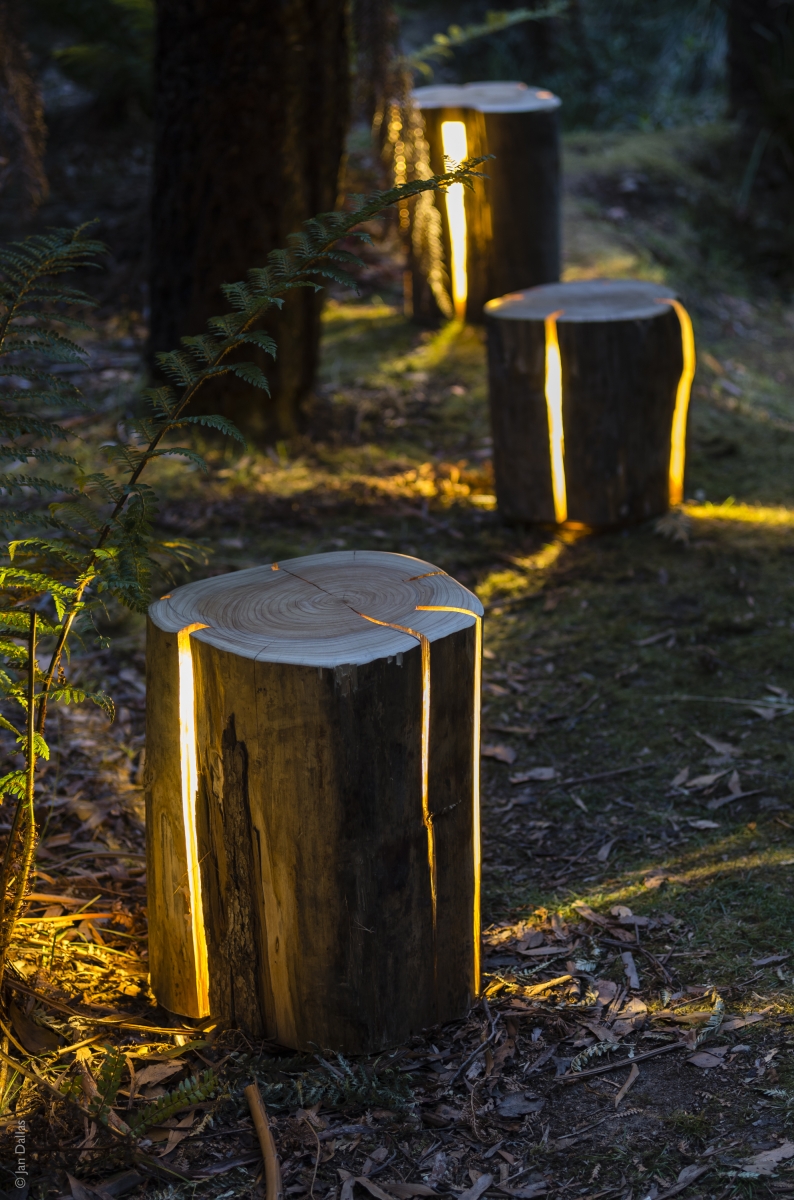 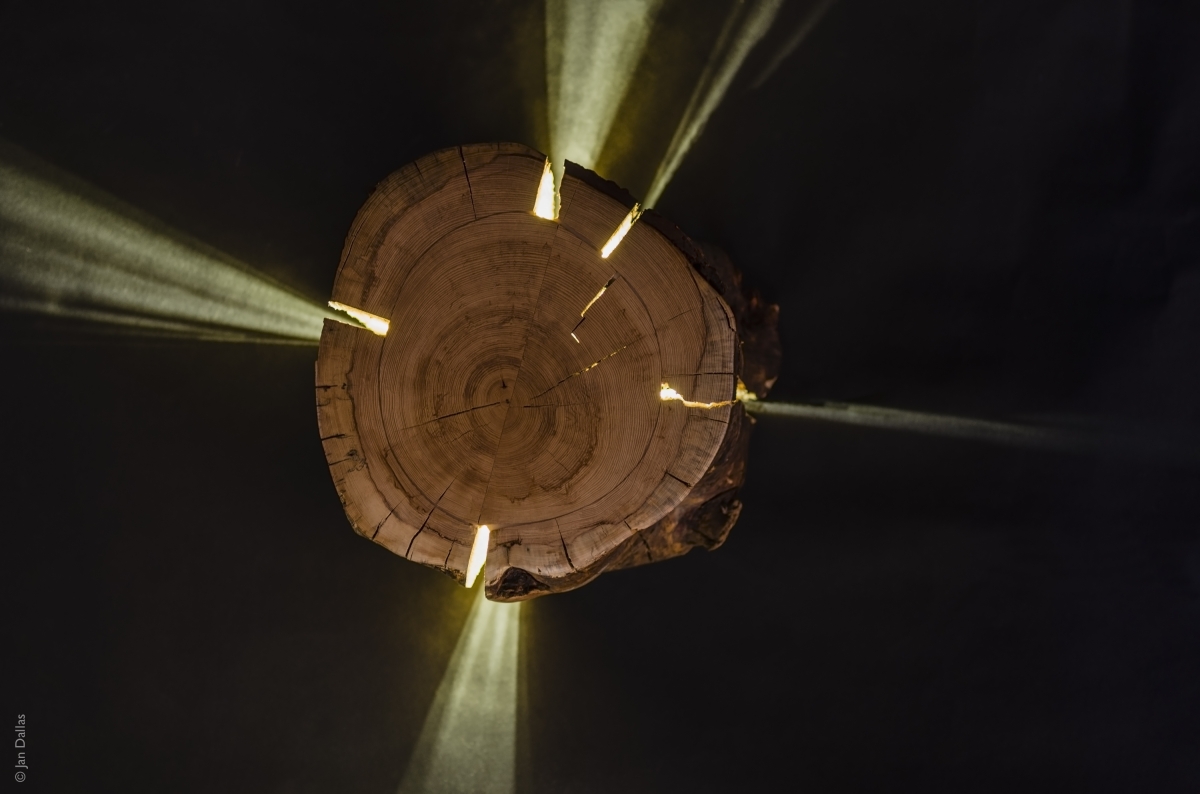 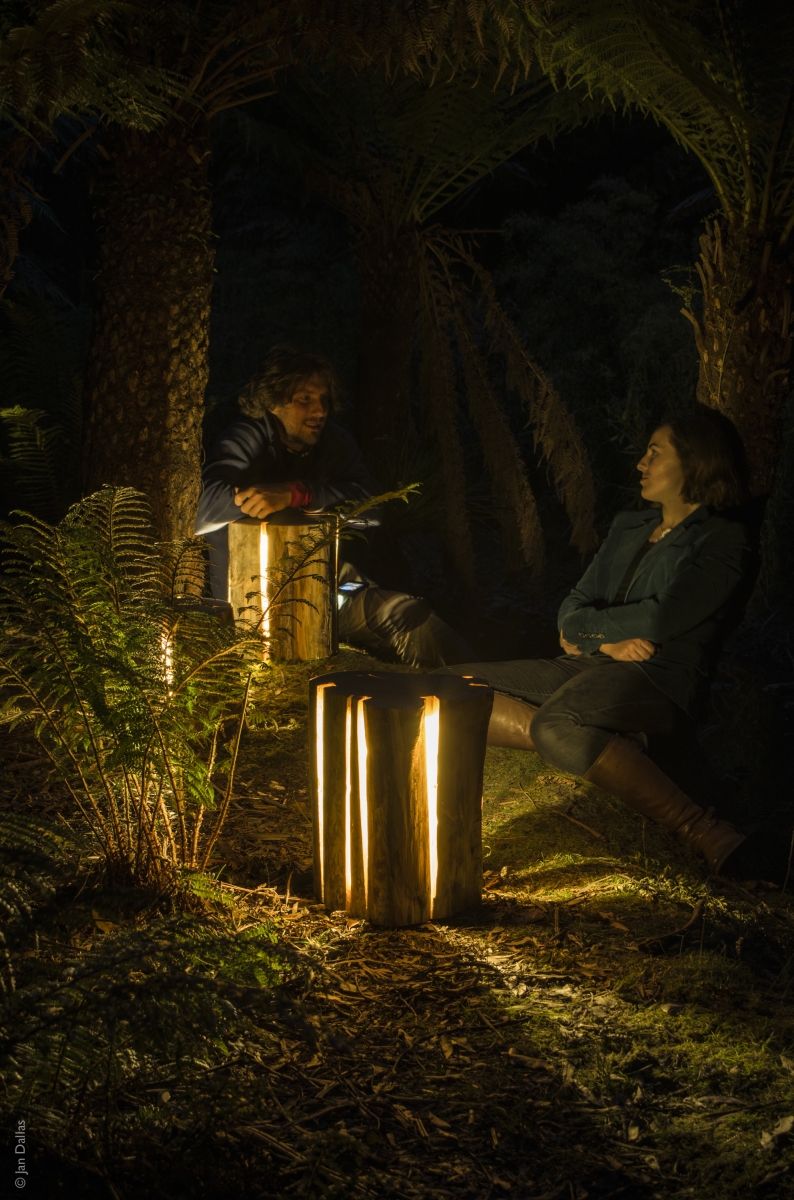 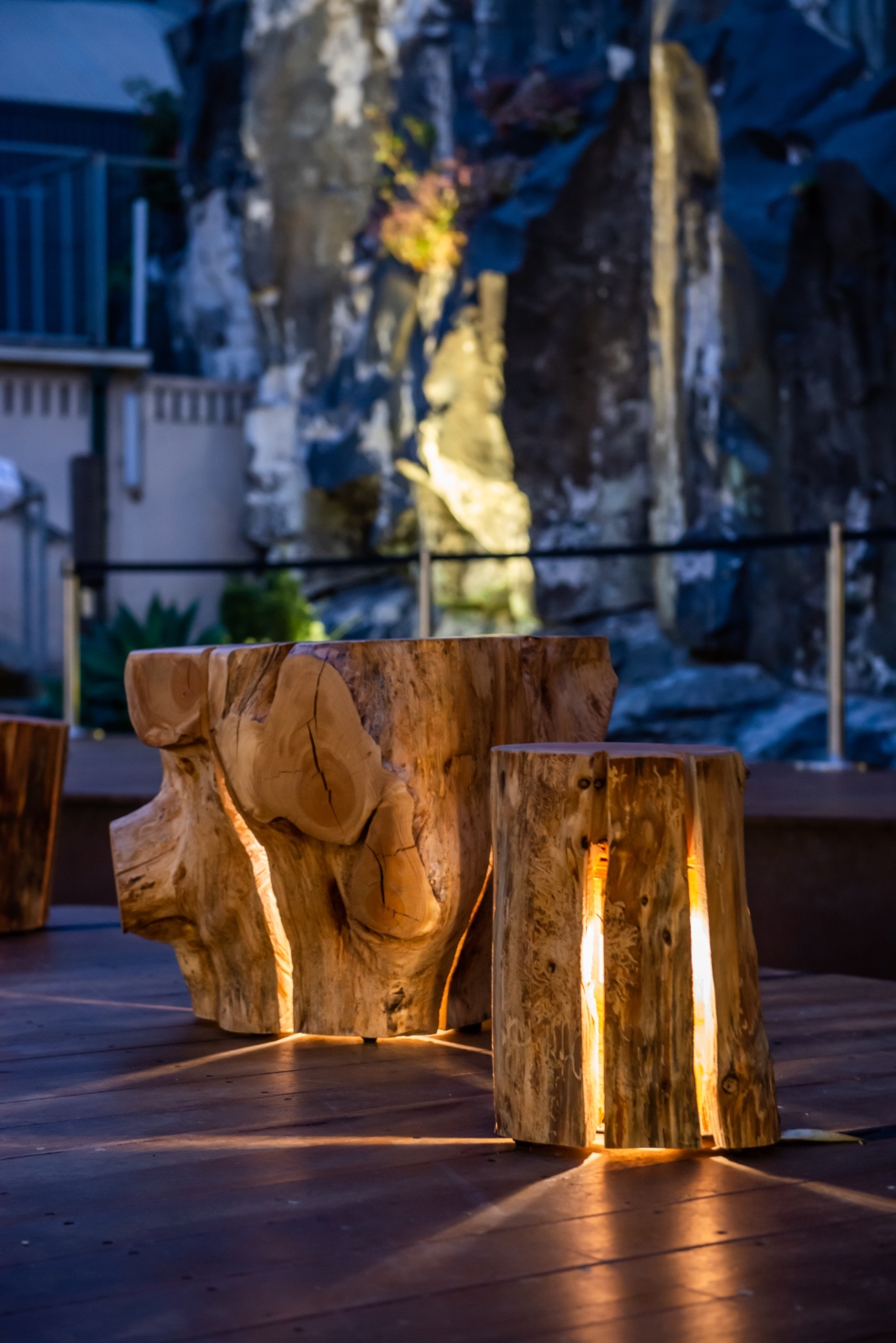 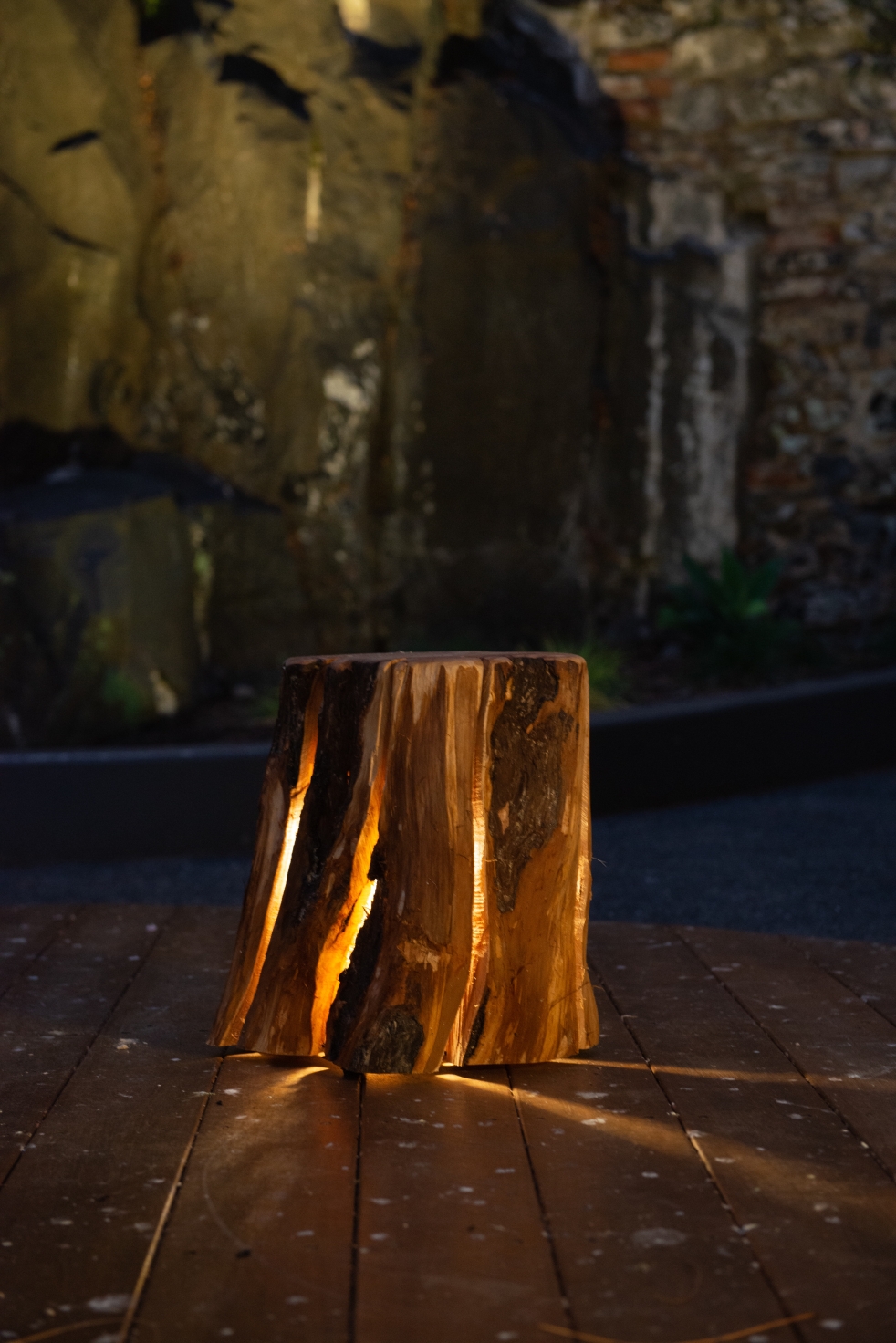 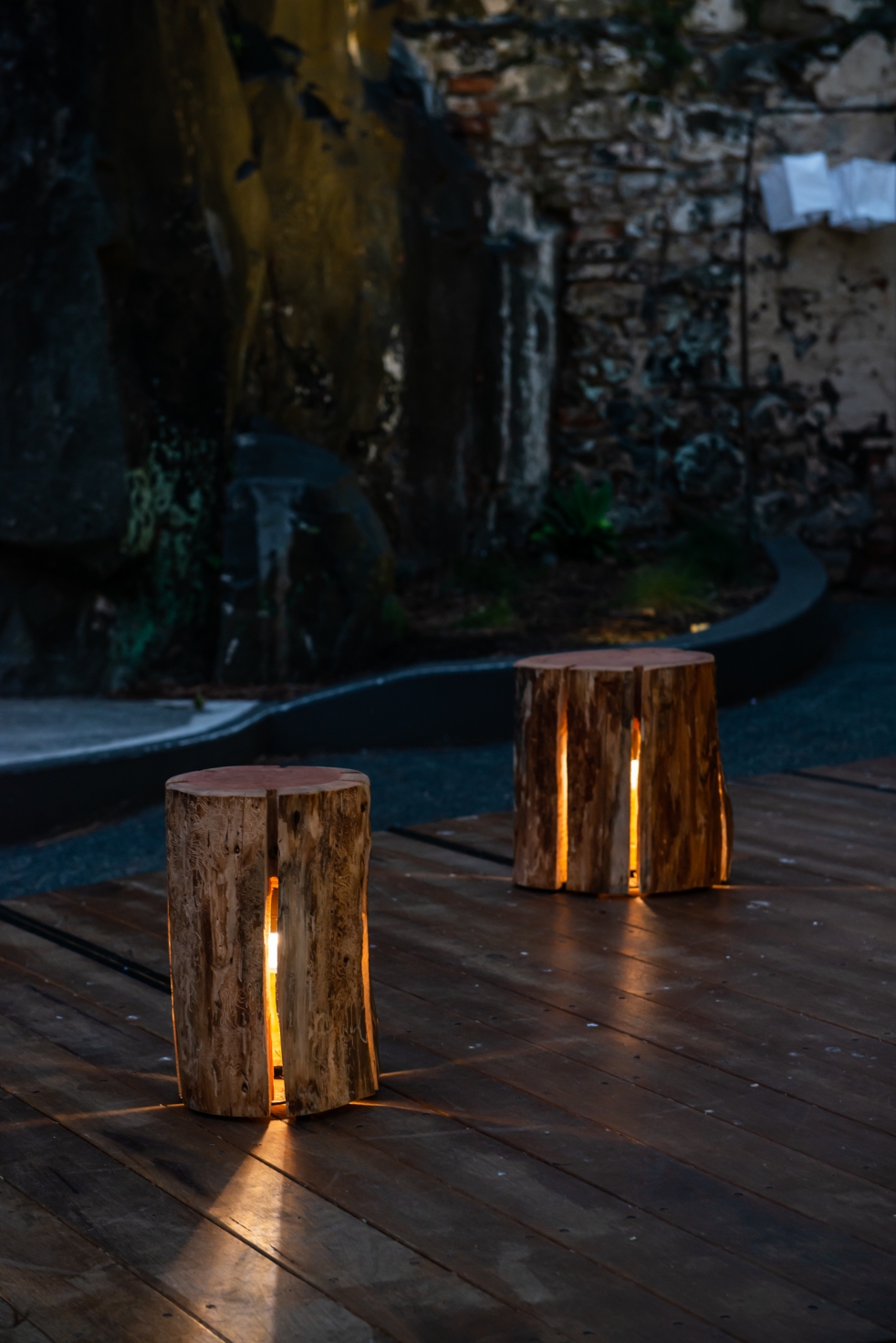 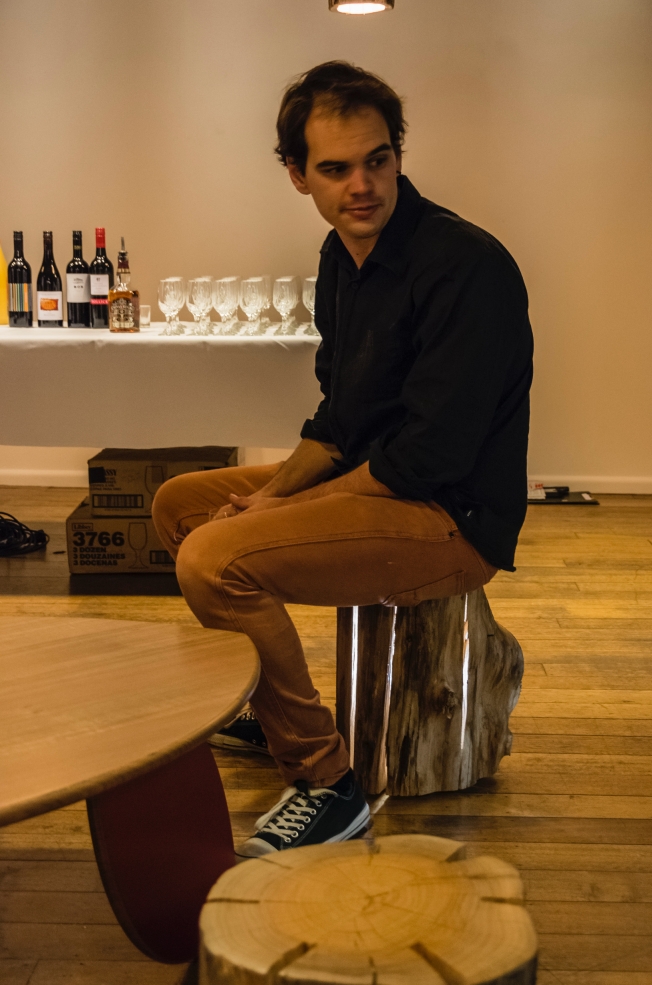 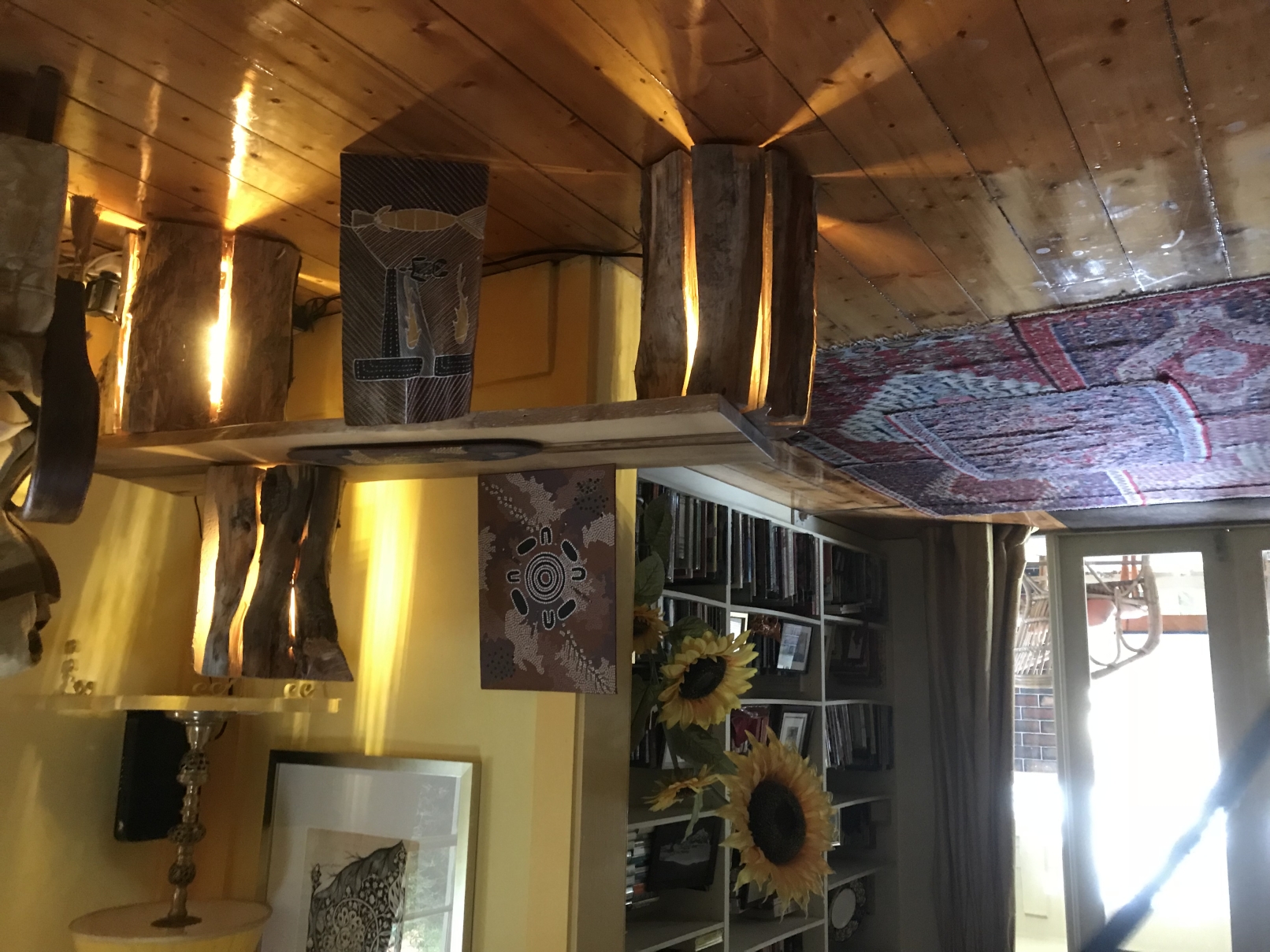 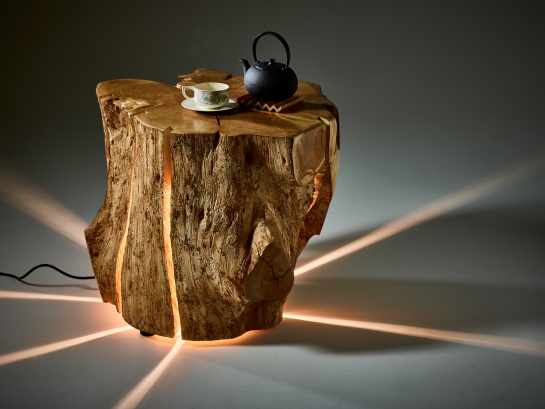 
Measuring approximately 400mm high and 300mm wide these lamps can be used in multiple applications.
Being weather resistant the Stump Wired version of this lamp is ready to be wired (12 volt) in any setting outdoor or in.
Alternatively the ‘Battery Operated Stump’ extends the applications of our successful Stump design, using high-quality Japanese NiMH batteries giving up to 8 hours of weatherresistant, wireless portability.


Stumps are often used as a table or stool when in the outdoors. This design has taken the idea of dispersion of light through cracks in timber and turned it into a multipurpose object which can be used as a table, stool or to illuminate an area with shards of light. These shards come from a warm white LED multi directional G4 housed inside a Hunza Mini Bollard system.
These shards of light dispersing through and around the object evoke a sense of mysticism and storytelling but also draw on the emotive feeling one gets when walking under a forest canopy.

This object has used timber which has been salvaged. Directly inspired by the natural environment, the warm yellow light represents the fiery fate the timber would have otherwise have been exposed to.

Bio I am a lighting and furniture Designer/Maker based in Tasmania, Australia. Much of my work is inspired by the natural environment. Concentration on overall form, rather than intense detailing, with an interest in how light performs through and around these forms and materials, is of interest to me. This light emanating from the periphery reflects the alternative sensory world in which I design, being legally blind with less than 5% vision.

I try to avoid quick moving trends in my work, but instead focus on designing and making things to stand the test of time, both metaphorically andphysicaly

Other prizes In 2010, early in Duncan’s career, he was the recipient of the Designed Objects Tasmania Springboard Scholarship and has since been a finalist in many of the Australian design industry's top awards and beyond. This includes The Edge Green Award in 2014 (Winner – Sydney), the Bombay Sapphire Design Discover Award 2011 (Finalist – Sydney), Ministers Youth Arts Award in 2011 (winner- Tasmania) and the LAMP Award in 2014 (2nd place – Canada). As a small scale designer/maker/practitioner, winning the London-based architectural lighting design Darc Award for Best Floor light of 2018 is one of Duncan’s crowning achievements. He competed against many international design firms to win the accolade, which was selected by over 6000 industry peers (lighting designers, interior designers and architects). Duncan was invited in 2017 and 2019 to show his work at Euroluce biennial International Lighting Exhibition at Salone del Mobile in Milan – the world's largest decorative lighting trade exposition, and was also shown at Venice Design 2018, part of the Venice Biennale. As a partially blind (less than 5% vision) visual artist and designer, Duncan appeared at the Powerhouse Museum during the Sydney Design Festival providing the Alternative Sensory World Keynote in March 2019. His achievements as a vision impaired creative practising in a visually dominated field have been recognised by him winning the Tasmanian Community Achievement Award in 2014 for Disability Achievement, and an Australian Aspire Award for Disability and Small Business in 2020. In July 2019, Duncan was a guest teaching fellow at the Bartlett Architecture School at University College London, teaching design making as a world-leading vision impaired practitioner. In his home town of Hobart, Duncan sits on the Board of a number of local design organisations, Designed Object Tasmania, and Designed Made Tasmania.